Moving Monuments: The Material Lives of Sculptures from the Danish Colonial Era

Moving Monuments examines the aesthetic lives of monumental sculpture in the context of Danish colonial history. Working from the premise that sculptural monuments are dynamic historical agents whose functions and contexts change across time and space, the project examines the intersections of art, power, and imperial history. 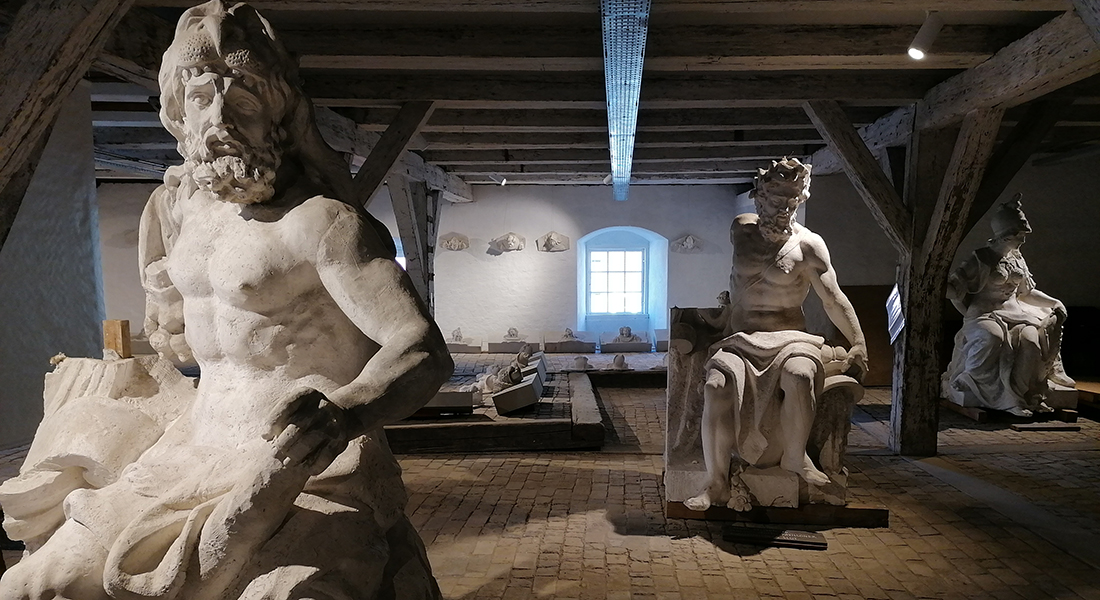 Moving Monuments seeks to problematize the assumption that public monuments are static entities made for eternity. In contrast, the project focuses on the material, historical, and political transformations and reframings involved as monumental sculptures move between different sites and across time.

One of the empirical starting points for the project is the Lapidarium of Kings: A collection of 384 sculptures made during the height of the Danish-Norwegian Empire between the 17th and the 19th century, removed from their original contexts and placed in storage in Christian IV’s Brewhouse in Copenhagen. The project suggests that sculptures taken out of their “primary” use can be a productive site for discussions on the afterlife of Danish imperial culture.

Monumental sculpture has taken central stage in contemporary discussions on colonial history, structural racism, inequality, and marginalization. Recently public statues of Danish kings, missionaries, and explorers have been confronted by activists seeking to address unfinished histories of Danish colonialism. Statues of Hans Egede in Nuuk and Copenhagen have been daubed in red paint with “DECOLONIZE!” and “RACIST!” added to their plinths, and a plaster bust of King Frederik V has been thrown into the waters of the Copenhagen harbor. Artists have also erected new critical public monuments, such as Jeannette Ehlers and La Vaughn Belle’s I Am Queen Mary (2018) – the first statue of a Black woman in Denmark, and the first monument to commemorate histories of resistance against Danish colonial rule.

The attacks against statues and the new counter-monuments have been met with curiosity, confusion as well as strong emotional outcries from politicians, scholars, and the broader public. The heated public reactions have exposed both a widespread uncertainty of how to understand the relationship between art and colonial history in a Danish context, and a lack of knowledge of the background for and shifting contexts of public sculptures more broadly. Moving Monuments seeks to create historical awareness and new knowledge about the relationship between art and colonialism through a series of in-depth studies of monumental sculpture from the 17th and 18th centuries that have been subjected to shifting locations, contexts, and meanings. The research project has three main aims:

Moving frameworks combines theoretical perspectives from global- and transcultural art history, post- and decolonial art theory and archaeology, and geohistories of colonial entanglements to examine the intersections between political and aesthetic projects and logics in the Danish empire. Reaching beyond the traditional analysis of sculptures produced in the Danish colonial period as relating to aesthetic movements such as neo-classicism, the sub project will center on works by sculptors J.F.J. Saly (1717-1776), J.G. Grund (1733-1796), and J. Wiedewelt (1731-1802) located in the Lapidarium of Kings, introducing the concept imperial aesthetics as an analytical framework for examining Danish monumental sculpture in the 18th century.

Moving Matter explores the intense exploitation of white stones quarried in Gotland and sites in Norway and Italy that underpinned the development of monumental sculpture in Denmark in the 18th century, in line with European preferences of non-colored, ideal representations. Marble stones were extracted in blocks directly from the quarries located across Europe in complex systems of extraction and consumption, which remains unexplored. Through a combination of network analysis, archival studies, field studies, and formal analyses the sub-project engages with debates on aesthetics and ideological idealization of white marble, generating new knowledge and perspectives benefitting art historical research on monumental sculptures from antiquity to today.

Moving Encounters brings analyses of imperial aesthetics and imperial networks in dialogue with contemporary debates on contested heritage and colonialism in public art and museum cultures. The sub project examines and discusses historical ideologies and memory politics as well as the costly efforts involved in preserving imperial aesthetic culture in Denmark critically addressing the role of monumental sculpture and public art museums in the negotiation of national memory cultures of today.

The research project is connected to national and international research and curatorial communities through an advisory board, which brings together representatives from collaborative institutions and networks.

Members of the advisory board

The project is funded by the Novo Nordisk Foundation’s Investigator Grant.