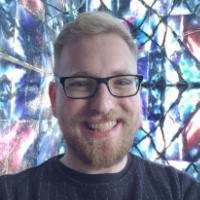 Bart Pushaw is a historian of the art of the colonial Americas, with a particular focus on the Circumpolar North and Central America between the eighteenth and twentieth centuries. As a Postdoctoral Fellow in the international research project The Art of Nordic Colonialism: Writing Transcultural Art Histories, he is concerned with the correspondences of art and material culture between the Indigenous Arctic and the Black Atlantic. Beginning in January 2022, he will serve as a Mads Øvlisen Postdoctoral Fellow of the Novo Nordisk Foundation to complete his first book, tentatively titled Indulgent Images: Indigenous Artists of the Colonial Arctic. The study establishes a vital historicity to the intra-Indigenous networks of artistic exchange that took place across Sápmi, Kalaallit Nunaat, Inuit Nunangat, and Alaska in the early colonial period (ca. 1740-1950), revealing how Indigenous artists of the Arctic intervened into global period discourse that had racialized their land and livelihood as aberrant.

He received his Ph.D. from the University of Maryland in 2019, with a dissertation on the valences of indigeneity and colonialism in the visual culture of nineteenth-century Eastern Europe (Estonia and Latvia). His early training in Eastern European art fostered longstanding investment in Baltic art history. In February 2021, the Art Museum of Estonia invited Pushaw to assist in the reinstallation of the permanent collection in "Landscapes of Identity: Estonian Art, 1700-1945," where his exhibition "Rendering Race" was an inaugural part of the experimental project space.

Particularly invested in the stakes of art history’s global turn, he is dedicated to cultivating art historical literacy across the discipline’s subfields in his teaching and scholarship. In Fall 2021, he is co-teaching two courses at the University of Copenhagen: "Art History Today" (with Mathias Danbolt and Amalie Skovmøller) and "Art, Race, and Resistance in the Arctic" (with Mathias Danbolt). In Spring 2022, he is on research leave in Kalaallit Nunaat.

Forthcoming publications tease out the complex temporalities of early Inuit printmaking; Sámi migration and artistic exchange with Iñupiat in Gold Rush Alaska; and the impact of nineteenth-century Latin American painting in Eastern Europe, among other topics. A separate ongoing study investigates the visual cultures of late colonial Panamá, and how the country's modern artists later negiotiated a conflicted position amidst Latin America's waves of Indigenismo.