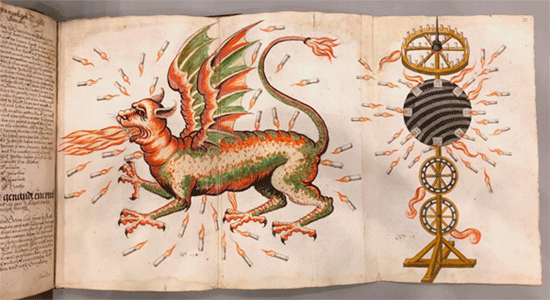 One of the almost identical manuscripts is dedicated to King Frederik II (r. 1559-1588), the other is dedicated to Christoffer Valkendorf, an official at the court of the king, and dated 1585. They are written in German by the specialist in artillery, Rudolf von Deventer, who offers them to his patrons as a manual necessary for defence against the arch enemies of the Christian regime.

A singular testimony of the war and festival culture, the manuscripts constitute the point of departure for our investigation of the concepts of materials and technologies at the time in Denmark and abroad. Our aim is a broader, interdisciplinary analysis of the ideas about culture, nature, and technology c. 1550-1650.

The project takes its point of departure in the digitalization and transscription of the manuscripts, both Kunstbuch von allerhandt Kunsten der Argkaley, Geschütz und Feuerwerk zu Wasser und zu Lande and Bericht vom Pulver und Feuerwerken are accessible online at the Royal Library.

We furthermore aim at having the texts translated to contemporary English.

We hope to draw new attention to a field crossing over various aspects of the visual culture of the time and shed light on some of the following questions:

Research in the material and its contexts will be presented at an international conference in Copenhagen, fall 2023 (call for papers in the fall of 2022).