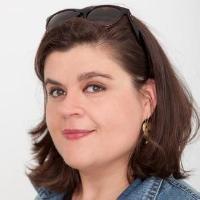 Ania Mauruschat is a Marie Skłodowska-Curie Actions (MSCA) Postdoc Fellow within the Horizon Europe programme of the European Commission at the Sound Studies Lab at IKK. Her research project "Sounding Crisis. Sounds and Energies within Climate Change" (09/2021 - 08/2023) researches indigenous and non-indigenous sound practices of activists and artists addressing the human-nature relationship in times of climate crisis in Denmark, Greenland and Australia.

Ania is a German media studies scholar (aesthetics & ecology, theory & culture) and lecturer, focussing on sound and radio. Trained as a journalist and as an editor and educated in the humanities and social sciences in Munich, she worked from 2002 to 2012 full-time for the press and public radio stations. Mainly she focused on the ramifications of digitization on art, literature and sciences. This lead to a special research and work collaboration with the radio drama & media art department of the Bavarian broadcasting station Bayern 2 (BR), amongst others resulting in the 15 part interview series „SuchmaschineWissenMacht: Chancen & Risiken der Digitalisierung“ (2007/08).

Her second career as an academic started, when she worked from 2012 to 2014  as a scientific assistant, lecturer and project manager at the chair for media aesthetics at the University of Basel (Switzerland). There she was also in charge as project manager of the development of the Sinergia research project "Radiophonic Cultures" (2015 - 2018). Since January 2018 she is member of the interdisciplinary doctoral programme „Epistemologies of Aesthetic Practices“ at the Collegium Helveticum in Zurich, Switzerland. The title of her PhD project is „Radiophonics, Noise & Understanding. Towards an Epistomology of Radio Art“. It is located at the University of Basel, Switzerland, and led her for field research to Australia (01 - 03/2017) and the USA (09/2018).

From October 2017 to September 2021 she was elected speaker of the consortium Auditive Culture & Sound Studies of the German Society of Media Studies. From April 2019 to November 2021 she was assistant of the president of the Deutsche Gesellschaft für Ästhetik.