Viral Cultures - Activist Archives at the End of AIDS2 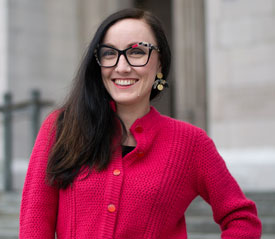 Seminar with Marika Cifor, feminist scholar of archival studies and digital studies. She will be visiting the Uncertain Archives group, and for the seminar she will be presenting ongoing work from her upcoming book on Viral Cultures.

Archives are becoming as important to AIDS as the biomedical event itself. Archiving, the practices and acts of creating, collecting, preserving, and making accessible political, cultural, and medical knowledge, is a vital component of AIDS cultural activism. Knowledge about HIV/AIDS would otherwise be marginalized, suppressed, or forgotten altogether.

Despite the recent proliferation of scholarship, popular films, major exhibitions, memorials, and other cultural productions on AIDS activism in the United States in 1980s and 1990s, the archives of AIDS upon which such projects are built have not been investigated previously. In Viral Cultures: Activist Archives at the End of AIDS through an archival ethnography, I demonstrate that vital nostalgia should shape the ways in which we record and remember in, with, and through AIDS archives.

Nostalgia has long been dismissed and derided by scholars and popular commentators as a politically conservative and self-indulgent wallowing in the past that stands in the way of social change in the present and for the future. Using case studies, I center the temporal and political potential of nostalgia as recorded and produced by archives documenting 1980s and 1990s AIDS activism in the United States.

Vital nostalgia, the analytic inaugurated in this book, is a generative practice for interrogating, addressing, and repairing structural power inequities grounded in the bittersweet longing for a past time or space. It names the critical examination of the present through ongoing relation to the past.

Records hold the power when harnessed by activists, artists, curators and archivists through vital nostalgia to be mobilized as forces that repoliticize AIDS and reinvest AIDS time with palpable urgency. The temporal and affective drag of holding onto the past in such a vital nostalgic practice is about its political potentiality for feeling, for imagining, and for enacting a different, more just future.

Marika Cifor will share key chapters of her forthcoming book with us that participants are invited to read in advance. Please sign up by writing an email to kristinv@hum.ku.dk and we will share the reading material with you.

The seminar is hosted by Archival Encounters and Uncertain Archives and funded by The Carlsberg Foundation and The Danish Research Council.

Marika Cifor, Assistant Professor, Information School, University of Washington is a feminist scholar of archival studies and digital studies. Her research investigates how individuals and communities marginalized by gender, sexuality, race and ethnicity, and HIV-status are represented and how they document and represent themselves and their social groups and movements in archives and digital cultures. This multidisciplinary scholarship uncovers how archives and digital technologies and cultures are shaping identities, experiences, and social movements.

She has published numerous important articles on archives, affect, gender and sexuality, such as