This lecture examines three genres of maps produced in the context of migration to Europe after the Arab uprisings: (1) maps produced by border control agencies in order to monitor, interrupt, and channel the movement of people; (2) maps produced after-the-fact by activists, chronicling the journeys taken or documenting, often in very high-resolution, the disasters that have befallen people along the way; and (3) home-made maps, produced by refugees and others for each other and exchanged in online forums in order to facilitate passage from North Africa and the Middle East to Europe. In these maps we see a struggle waged over mobility and the right to move, and in the third category in particular we read another sort of civic image activism, in which refugees and migrants themselves are making claims for their own rights and agency by means of images. These maps are at once operational, in that they make possible the very movement they chart, and aspirational, in that they make claims for the very rights that the refugees do not (yet) have.

Earlier the same day, at 10-12, there will be a seminar with Keenan. The basis for discussion here will be the Introduction to his book (co-authored with Eyal Weizman) Mengele’s Skull: The Advent of a Forensic Aestheticsand the article “Counter-forensics and Photography”, which will be distributed to participants beforehand. The seminar will be followed by lunch 12-13.

Seating for the seminar is limited, please sign up with Maja Höhn for seminar and lunch no later than Tuesday November 6.

Thomas Keenan is Associate Professor of Comparative Literature and Director of the Human Rights Program at Bard College. His research interests revolve around media and conflict; literary and political theory; humanitarianism and human rights; violence and politics. He is the author of Fables of Responsibility: Aberrations and Predicaments in Ethics and Politics (1997), coauthor (with Eyal Weizman) of Mengele’s Skull: The Advent of a Forensic Aesthetics (2012), and coeditor (with Wendy Chun) of New Media, Old Media (2005).Other books that he edited are: The End(s) of Museum (with John G. Hanhard, 1996), The Human Snapshot(with Tirdad Zolghadr, 2013) and The Flood of Rights (with Suhail Malik and Tirdad Zolghadr, 2016). Keenan is also an editorial and advisory board member of Journal of Human Rights, Grey Room, Humanity, and Scholars at Risk Network.

The seminar and lecture is organized by Interventions – Research Network on Humanitarian Politics and Culture and the Uncertain Archives Research Group, Department of Arts and Cultural Studies. 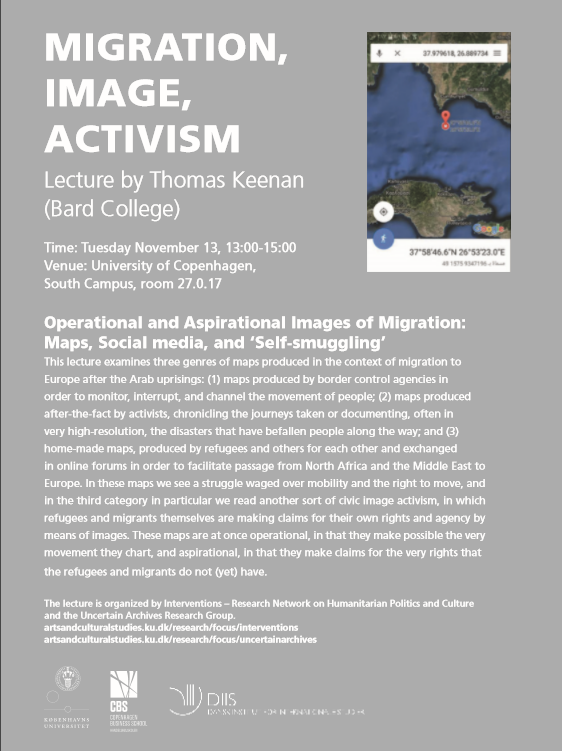