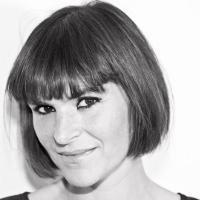 I work in the intersection of performance art, curation, activism and research. I am currently writing a practice based Ph.D. based on two projects in which I am the Co-Founder and Artistic Director; respectively Dome of Visions (2012-) and Sisters Academy (2012-). I continuously explore new ways to integrate and unfold the aesthetic dimension in and outside the cultural institutions and the ”stage”. Currently, I work from the vision Sensuous Society – a radical future scenario where the sensuous and poetic dimension is at the center of society. I continuously unfold and explore this vision through my 1:1 performance experiments –  also see my TEDxtalks Sensuous Society (2013 at TEDxCPH) and Sensuous Learning (2015 at TEDx UppsalaUniversity). The point of departure in my PhD is also how we can move towards a more expanded sensuousness through sensuous learning. I was an external lecturer at Roskilde University (2011-2017) in the programme Performance Design and furthermore, I was the curator of performance art at Roskilde Festival (2013-2017). Moreover, I am a part of the working community NXT and the international independent urban research center Theatrum Mundi initiated by Professor Richard Sennett and Professor Saskia Sassen. See Sensuous for a full overview of my activities.
PhD focus

In this artistic research PhD I investigate how the sensuous might support a transition towards a more sustainable future by engaging theory on aesthetics and ecology in the analysis and discussion of my artistic practice in the projects Dome of Visions and Sisters Academy (by Sisters Hope), responding to the Sensuous Society Manifesto, envisioning a potential future world governed by aesthetic premises, written as a response to the financial crack in 2008 and to the on-going ecological crisis. In my practice over the last decade I have been interested in ways to ‘democratize the aesthetic’ (cf. the Sensuous Society Manifesto), by which I mean to open the access to the sensuous and poetic mode of being in the world. Thus, both projects share this intention, and they each, in different ways, tease out ways to accomplish that. Very roughly put, the dome-shaped temporary construction Dome of Visions provides a sensuous and poetic space to the general public for aesthetic contribution and creation due to its open curatorial framework, and Sisters Academy works through a performance method evoking the sensuous and poetic aspects of our being within a highly immersive performance-installationary space. As I have understood both projects to be research-based from the beginning, expansive reflective in situmaterial has been generated by the participants in the projects. Subtractions of this material will be included as empirical ‘data’. In my analysis I will apply the three-phased ritual process (van Gennep [1909] 2013; Turner 1974; [1969] 2008; [1967] 2014; Fischer-Lichte 2008; Fischer-Lichte and Wihstutz 2018) and the three ecologies (Guattari [1989] 2008) as analytical operational frameworks.

In the analyses of the subtracted in situ ‘data’, which is generated while the participants are in a sensuous and poetic mode, I apply the research question: What is the impact of Dome of Visions’ and Sisters Academy’s evocation of the aesthetic on the participants? And what does that tell us about how the aesthetic, and thus the sensuous, might support the transition towards a more sustainable future?