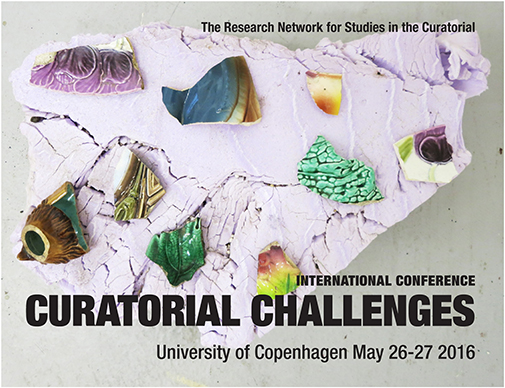 The exhibition is a primary site of cultural exchange; part spectacle, part socio-historical event, and part structuring device, exhibitions establish and administer meanings of art and cultural heritage. Temporary exhibitions increase in cultural importance, while the traditional role of museums as institutions of Bildung transforms—even museums with well known and established collections follow the call for ever changing exhibitions. Understanding the changing role of curating in this process calls for new research.

The conference invites curators and academics from the interdisciplinary fields of art, cultural history, and museum studies in order to discuss the challenges of curating in contemporary society.

•    exhibitions as a form of research
•    interventions: contemporary artists working with or within museums
•    participatory practices and strategies
•    curating within the changing role of museums as Bildung institutions

Curating is a very dangerous theatrical practice for it is the occasion for both constructing and deconstructing the premises, promises, and consequences of what may be taken as social realities. It is one of a variety of ways of using things to think with, and is a practice with deep historical roots in Western antiquity. It not only precedes and is thereby more fundamental than what are currently distinguished as exhibitions, galleries, collections, or museums, but it is also not unique nor exclusive to any of those institutions and professions. Whether curating refers to the caring, organizing, managing, and manifesting of phenomena (whether material or virtual), it is at the same time stagecraft (organization in space-time), dramaturgy (narration and articulation), and rhetoric (the artistry of persuasion and the reckoning with things). It is at base a mode of critique. Curating, as a species of Bildungsroman, problematizes clear or fixed distinctions between art and religion precisely by foregrounding the processes of knowledge-formation and understanding. It is self-reflexive, calling attention to the art, artistry, and artifice of social realities; the fictions of factual representation.

An exhibition, then, is less a kind of thing of which curating is a function, and more a way of using things: a particular orientation toward potentially any things. A way of staging or framing events and phenomena as significant in and for given social and cultural contexts. A method, in short, of making the visible legible so as to present, represent, manifest, or convey as significant or meaningful diverse values and beliefs for individuals, groups, or communities. Exhibitions are in addition dramatic occasions for seeing together in the same frame what may have had distinctly different origins, histories, functions, and purposes - juxtaposing philosophy, politics, law, rhetoric, and religion.

Donald Preziosi (PhD, Harvard) is Emeritus Professor of Art History & Critical Theory, UCLA and Distinguished Research Professor. He is the author, editor and co-editor of 14 books on art and architectural history, theory, and criticism, and the interdependence of philosophy, theology, politics, and museology. He has held visiting professorships in the US, Europe, Istanbul, and Australia. His most recent book is Art, Religion, Amnesia: The Enchantments of Credulity (London: Routledge, 2014).

Museums are institutionally divided into three main areas of work: research, heritage management and public communication. Often these three domains live lives of their own within the same institution, and even cause internal conflicts as staff tend to disagree on which of the three domains should be given priority. The question is, however, whether it is possible to think of the three domains as integrated and therefore as the basis of a particular museal way of exploring the world. In terms of exhibitions we could phrase the question as: is it possible to think of exhibitions and the process of making them as research in and of itself? If so the making of an exhibition should not merely reflect and disseminate established knowledge, but produce new knowledge in the process.

Such a take on exhibition making poses a challenge to what it means to curate an exhibition – maybe in particular in museums of cultural history which are the focus of this presentation. If exhibition making is not ‘just’ about making certain insights accessible and sensible to an audience, but actually a matter of generating a kind of ‘research surplus’, how do we go about that? What kind of competencies do we need? What kind of collaboration are we looking for?

This presentation will consider recent suggestions on the exhibition as experiment, research and exploration and on basis of accounts from an up-coming exhibition on ‘COLLAPSE’ it will try to answer some of the questions raised in this abstract.

Peter Bjerregaard (PhD) is senior adviser of exhibitions at Museum of Cultural History, University of Oslo. His research is mainly concerned with a theoretical re-thinking of the museum institution and with the potential of exhibitions as research. Bjerregaard is co-editor of Materialities of Passsing (Ashgate 2016) and editor of Exhibitions as Research (Routledge, forthcoming).

The dominating discourses and configurations/representations within museums today are usually presenting the past in very reduces stereotyped manners, especially in relation to gender. Even if the contexts are different, the stories are often told in the same way they have always been narrated.

This way of narrating the past has broadly been identified as the Authorized Heritage Discourse (AHD) by the critical heritage scholar Laurajane Smith (2006). The AHD is conceived as an ‘official’ way of understanding heritage and is, according to Smith, a particular way of understanding heritage which stresses the importance of expertise knowledge, and privileges the cultural recollection of a limited social stratum, including a limited scope on gender relations and representations.

One way of challenging this AHD is to critically analyse the curatorial practices from an intersectional perspective (Crenshaw 1991, Lykke 2010, Grahn 2011). This means to ask questions of how exhibitions configure and shape our remembrance of the intertwined relations of social identities such as gender, class, age, sexuality, dis/ability etc., which this presentation will do.

Wera Grahn is Associate Professor in Gender Studies, Senior Lecturer and Head of the Unit for Interdisciplinary Gender Studies at Linköping University. Grahn has vast experience in researching, teaching and publishing in the field of cultural heritage with a focus on gender perspectives. Her academic background is Ethnology and History of ideas, and she earned her PhD in Gender Studies with the dissertation “Know Thyself”: Gender, Historical constructions and representations in a Museum of Cultural History (2006)

Tone Hansen: The Use Value of Research in the Art Institution

Where does research end, and where does an exhibition begin? Is there a moment when the institution leaves further investigations to the audience, and how can artistic research inform and influence an institutional understanding of a collection? The starting point for the presentation “The Use Value of Research in the Art Institution” is the conference’s question: what is the potential of the exhibition format for presenting or even conducting research?

The presentation will be based on the exhibition project “In Search of Matisse” at Henie Onstad Kunstsenter in 2015, and the research conducted in the three-year period leading up to the exhibition. The inquiry that led to and forms the basis of this presentation came from the heirs of the Jewish art collector Paul Rosenberg via the Art Loss Register (ALR). They informed HOK that the painting Robe bleue dans un fauteuil ocre (Blue dress in ochre armchair) from 1937 by Henri Matisse had been confiscated by the Nazis from Rosenberg’s storage space during the invasion of France during the Second World War, and that the painting had been missing since. HOK returned the painting to the heirs after a two year long research period.

In parallel with HOK's own investigations and provenance research on the above mentioned painting as well as 19 other pre-war paintings, HOK established a college of artists where the ongoing research and the consequence of the findings were discussed, in order to broaden our understanding of provenance. Celine Condorelli, Marianne Heier, Dag Erik Elgin, Matts Leiderstam and Michael Rakowitz were all invited to develop a new work in parallel to our archival research, more than 16 months before the show opened. The conversations led us to investigate the relationship between investigation of facts and research – both in terms of academic and the artistic understanding and use of the term, and led us to broaden the definition of provenance research to include a consideration of the social life of an artwork, i.e., an extensive examination of the social and societal constructs art has moved through, and the obliterating consequences of contemporary looting for cultural existence. In addition works by Hans Haacke, Hito Steyerl, Ulay and Mounira al Solh were included in the exhibition.

“The Use Value of Research in the Art Institution” will present and discuss each of the commissioned projects by the artists, as well as other relevant projects and open up for a dialogue of the relationship between research and exhibition.

Tone Hansen is Director of Henie Onstad Kunstsenter (HOK), Oslo. Recently, she co-curated In Search of Matisse, an innovative exhibition based on provenance research investigating the looting of cultural heritage and artworks. Former curator at HOK and scholar at the Academy of Fine Art, Oslo with the project Megamonstermuseum. Editor of the readers Phantom of Liberty: Contemporary Art and the Pedagogical Paradox  (2014), We Are Living on A Star (2014), and (Re)Staging the Art Museum (2011).

How does one research for an exhibition, and how does research influence the exhibition itself? Looking into the ideas of artistic research, my talk will attempt to establish some working definitions of curatorial research, different methods and outcomes, and discuss if there is an entity we can call a ’Research Exhibition.’

Simon Sheikh (PhD) is a curator and theorist. He is Reader in Art and Programme Director of MFA Curating at Goldsmiths, University of London. He is a correspondent for Springerin, Vienna, and a columnist for e-flux Journal, New York. He is currently a researcher for the on-going Former West project, initiated by BAK in Utrecht, and working on a book about art and apocalypse entitled It's After the End of the World.

Curating within the Changing Role of Museums as Bildung Institutions I
Moderator: Peter Bjerregaard

Research Network for Studies in the Curatorial

Contact:
Research Network for Studies in the Curatorial
vest@hum.ku.dk