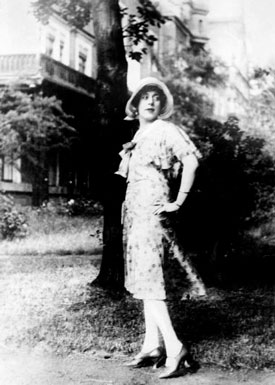 Gender has always been part of the political struggle. Magnus Hirschfeld's Institut für Sexual-wissenschaft – where the concept of transsexuality was introduced and where the Danish artist Einar Wegener was examined before his change of gender to Lili Elbe in 1930 – was destroyed by the Nazis.

Today, we see US president Trump take part in demonstrations against free abortion and oppose trans rights and Hungary's Viktor Orban prohibit gender studies at the universities. Right-wing politics is still very much about gender.

Come and hear Pamela Caughie talk about the new Lili Elbe-archive and take part in the discussion about transgender, historically and today.

In 1930 Danish artist Einar Wegener under-went a series of surgeries to live as Lili Ilse Elvenes (more commonly known as Lili Elbe). Her life story, Fra Mand til Kvinde (From Man to Woman), published in Copenhagen in 1931, is the first full-length and well-documented narrative of a subject who undergoes genital trans-formation surgery (Genitalumwandlung).

For the past five years we have been creating a comparative scholarly edition of this narrative, which exists in four variant editions in three languages published between 1931 and 1933. Its digital companion, the Lili Elbe Digital Archive (www.lilielbe.org), was launched on July 6, 2019 to commemorate the 100th anniversary of the founding of Magnus Hirschfeld's Institute for Sexual Science (Institut für Sexualwissenschaft), where Lili Elbe was initially examined. A highly collaborative and ambitious project, the Lili Elbe Digital Archive marks a milestone in the history of gender variance. This talk with present the story of this archive.