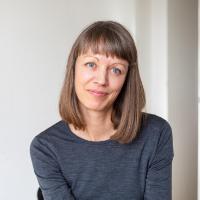 Sabine Dahl Nielsen is a cultural studies theorist researching contemporary artistic and curatorial practices, with a special focus on radical democratic and postmigrant perspectives on art and culture.

Dahl Nielsen holds a PhD in Moderne culture and cultural dissemination from the University of Copenhagen with the dissertation Art in Public Spaces: Conflicts and Negotiations as Critical Political Practices (2015). She was founder and co-editor of the photography journal Filter – for fotografi, and she is author of the book Det fotografiske rum (2011) and editor of the exhibition catalogue Art Incorporated: The Role of Art in Urban Development (2008). Her work on art in public spaces, radical democratic forms of participation and collective and collaborative artistic and curatorial practices have been published in journals such as Salon 55,Periskop, Nordisk museologi, Nordic Journal of Cultural Policyand FKW//Zeitschrift für Geschlechterforschung und visuelle Kultur, as well as in anthologies including A Space Called Public (2013), Dansk Gadekunst(2014), Kunst, kultur og deltagelse (2018) andCuratorial Challenges (2019).